This commentary uses the Norwegian Football Association’s COVID-19 crisis communication strategy as an example of how federations can take an active role and use their influence to guide and be proactive in the opening of a society after a lockdown. By paying close attention to the public debate and by interviewing the federation’s communication director, the authors outlined the four phases of the strategic crisis communication—and the consequences of them in Norway. While the first consequence was the postponing of the Euro Qualifier against Serbia on March 26 for the European Championship this summer, the lockdown changed the focus quickly, and the strategy became about getting all players back on the football fields. The authors elaborated on how a major federation can (and maybe should) take a leading role by using its “voice” in the media and public and expertise to aid reopening a society after lockdown.

—The COVID-19 rules made by the NFF so clubs could have activity that followed the government restrictions (included with permission of the NFF). May 13,  2020. https://www.fotball.no/contentassets/4b52dab0741c4340ad447a6640461d9a/koronavettregler-engelsk.jpg. NFF = Norwegian Football Association. 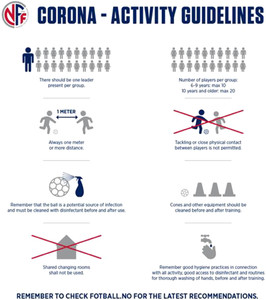