This case study features an Olympic-level female middle-distance runner implementing a science-based approach to body composition periodization. Data are emerging to suggest that it is not sustainable from a health and/or performance perspective to be at peak body composition year-round, so body composition needs to be strategically periodized. Anthropometric (n = 44), hematological, other health measures, and 1,500-m race performances (n = 83) were periodically assessed throughout a 9-year career. General preparation phase (September to April) featured the athlete at ∼2–4% over ideal competition phase body weight (BW) and body fat (%), with optimal energy availability being prioritized. The competition body composition optimization phase (May to August) included creating an individualized time frame and caloric deficit with various feedback metrics (BW, performance, and hunger) to guide the process. There were significant seasonal fluctuations in anthropometric outcomes between phases (47.3 ± 0.8 vs. 48.3 ± 0.9 kg BW; 53.6 ± 7.8 vs. 61.6 ± 9.7 mm International Society for the Advancement of Kinanthropometry sum of 8 [So8] skinfolds; p < .01), and a significant correlation of decreasing So8 during the peak competition period over her career (r = −.838; p = .018). The range of body composition during the competition period was 46.0–48.0 kg BW and a So8 range was 42.0–55.9 mm. There were also significant positive correlations between slower 1,500-m race times and increasing So8 (r = .437; p < .01), estimated fat mass (r = .445; p < .01), and BW (r = .511; p < .0001). The athlete only had two career injuries. This case study demonstrates a body composition periodization approach that allowed for targeted peak yearly performances, which improved throughout her career, while maximizing training adaptation and long-term athlete health through optimal energy availability.

—Anthropometric data versus 1,500-m race performance over a 9-year career (2008–2016; n = 53 measurements). ISAK sum of standard 8 skinfolds (in mm). Comparison made with race time if anthropometric data within ±30 days of a competition. ISAK = International Society for the Advancement of Kinanthropometry. 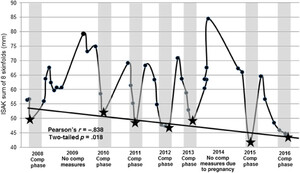 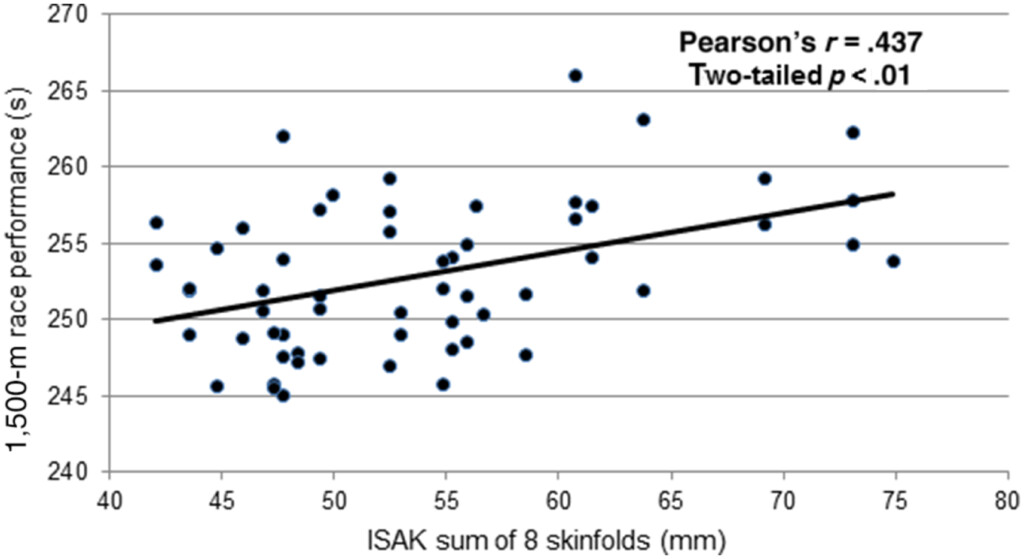