in Journal of Sport Rehabilitation

In adolescents with acute patellar dislocation, how does operative stabilization compare with nonoperative treatment for reducing dislocation recurrence?

Studies to date on this topic are limited in number, moderate in quality (levels II and III), and somewhat inconsistent in their findings. Thus, our conclusion that patellar redislocation rates with operative and nonoperative management are similar is based on a moderate degree of confidence.

An extensive search of the literature yielded 42 articles; however, only 3 studies1–3 met the eligibility requirements and were considered for review. These studies are listed in Table 1 and summarized in Table 2. All 3 studies examined the effect of operative versus nonoperative treatment after acute patellar dislocation in individuals between the ages of 8 and16.

The studies identified in Table 1 are the best available evidence found for this review. Two of the included articles are level II evidence, and the third article is level III evidence. Level of evidence was determined based on the 2011 criteria from the Centre for Evidence-Based Medicine.

The surgical techniques employed in the 3 studies differed somewhat, making direct comparisons difficult. Lateral retinacular release and medial retinaculum repair were used in all 3 reports. Palmu et al2 also reconstructed/repaired the medial patellotibial and/or patellofemoral ligaments in some cases. In contrast, Regalado et al3 used the modified Roux–Goldthwait procedure, which involves a proximal and distal realignment along with lateral retinacular release and medial retinacular repair. Thus, the Regalado et al3 study was the only one that used a bony realignment procedure (ie, distal realignment) as part of the surgical intervention for the majority (13/16) of patients. This is noteworthy since Regalado et al were the only authors in this review who reported a lower dislocation rate following surgery. Given the disparity in surgical outcomes between the reviewed studies, there is a need for additional investigations comparing the various operative techniques.

Nonoperative treatment differed somewhat between the reviewed studies, although all of the authors used exercise and bracing.1–3 Apostolovic et al1 also used cold packs during the first 24 hours after injury, immobilization, and later aspiration of the knee effusion. Palmu et al2 employed a period of immobilization followed by “thigh muscle exercises.” Apostolovic et al1 and Regalado et al3 utilized “isometric quadriceps exercises.” Unfortunately, none of the 3 studies provided descriptions of the specific exercises or exercise parameters (sets, repetitions, and frequency). Thus, we are unable to provide detailed recommendations based on these studies, although symptom-limited quadriceps strengthening exercises seem sensible. The authors of a 2010 systematic review on rehabilitation following lateral patellar dislocation concluded that there was little evidence to support 1 particular exercise approach for preventing future dislocations. The most common interventions used in that review included immobilization and isometric and isotonic quadriceps strengthening exercises such as straight leg raises, squats, and lunges.4

As with exercise, patellar stabilizing bracing was used in all the studies we reviewed although details were somewhat sparse. Apostolovic et al1 indicated that nonoperative treatment included “immobilization” but did not provide further information. Patients in the Regalado et al3 study used a “conventional lateral patellar support-Rehab brace” that permitted 30° flexion for 3 weeks and 90° flexion for the next 3 weeks. In the Palmu et al2 study, patients in both groups who had a dislocatable patella under anesthesia were managed with a removable knee extension orthosis (Immobilizer; Camp International, Jackson, MI) for 3 weeks, followed by a patella-stabilizing orthosis (Patella Stabilizer; Camp International) for an additional 3 weeks. Patients with a nondislocatable patella under anesthesia used a patella-stabilizing orthosis for 6 weeks. Given the inconsistency with bracing in these studies we are not able to provide specific bracing recommendations.

Another study5 comparing operative or nonoperative management for patellar dislocation was examined for this review, although the mean age of patients was 20 years, and so the study was not included. Interestingly, those authors also found that surgical stabilization neither reduce rates of redislocation (16.7% vs 20% for nonoperative group) nor it produce better subjective functional outcomes. Likewise, Nikku et al6 reported redislocation rates at the 7-year follow-up of 31% and 39% for the operative and nonoperative groups, respectively in a group with a mean age of 20. Thus, it appears that surgical and nonsurgical management of patellar dislocation tends to yield similar results in the skeletally mature and adolescents.

Individual characteristics and goals should be taken into consideration when choosing an acute patellar dislocation treatment approach. Unless future studies show a more definitive benefit for surgical management, exercise and bracing should be considered initially. Exercise and bracing are less invasive and likely to be less expensive than surgery. Future investigators should provide specific details to allow for both study replication and direct comparisons of different braces and exercise protocols. 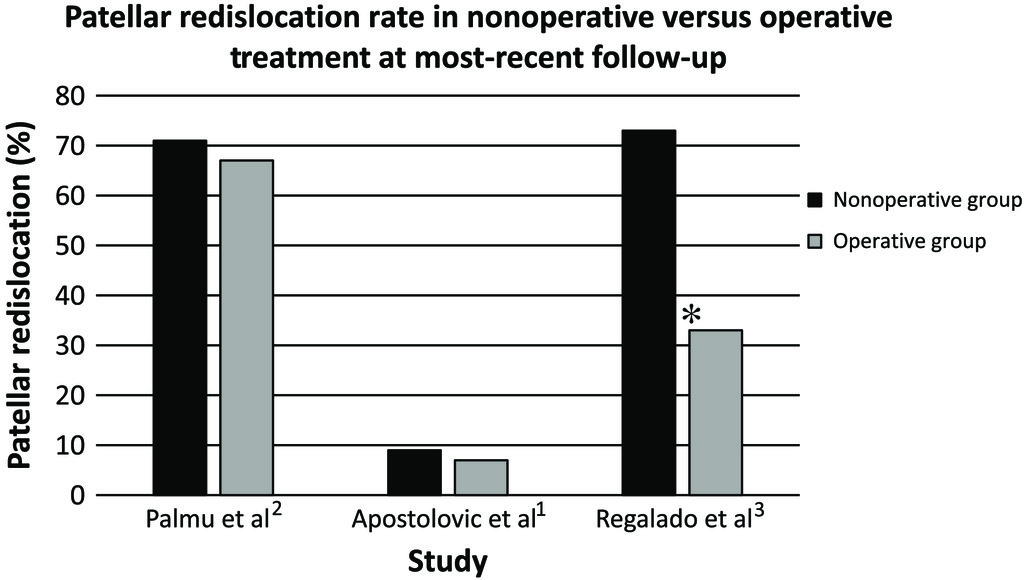