Physical Training and Upper-Limb Strength of People With Paraplegia: A Systematic Review

Context: Physical training improves the strength of upper limbs, contributing directly to the performance of activities of daily life, confirming one more time that the strengthened muscle is imperative for a rapid rehabilitation. Objective: To investigate the scientific implications of the impact of physical training on the strength of the upper limbs of people with paraplegias. Evidence Acquisition: The search strategy with truncations and Boolean operator was defined as: (spinal cord inju* OR traumatic myelopat* OR paraplegi*) AND (physical exercise OR strength training OR resisted training) AND (upper limb* OR arm OR armrest), for all of the databases. There were included experimental and quasi-experimental studies, published in the English language and with the complete text available, with at least 1 physical exercise that worked with the strength of the upper limbs. Two independent evaluators extracted from each article data on study characteristics (publishing year, country of origin, and study design), of the subjects (gender and age), and of the disability (level of lesion and cause). Evidence Synthesis: Seven articles were included in the systematic revision. The procedure used the most for measuring the maximum strength was the 1-repetition maximum test, followed by the isokinetic dynamometer and Quantitative Muscle Testing System. Furthermore, the most commonly associated variables in the included studies were pain in the shoulder, cardiorespiratory capacity, and functionality, respectively. The results showed that all of the variables improved because of the training. Conclusions: The training improved the strength, the functionality, and reduced the pain in the shoulder of the people with paraplegia. 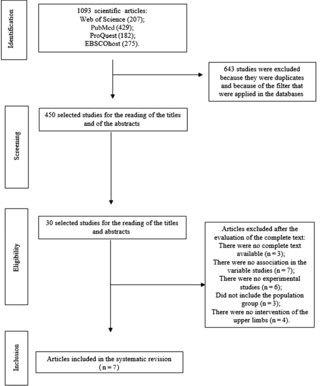 —Flowchart of the study phase. 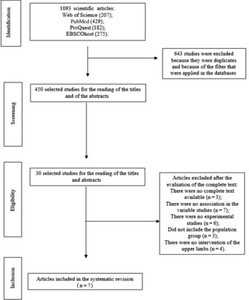