Context: Many different rehabilitation exercises have been recommended in the literature to target the gluteus medius (GMed) muscle based mainly on single-electrode, surface electromyography (EMG) measures. With the GMed consisting of 3 structurally and functionally independent segments, there is uncertainty on whether these exercises will target the individual segments effectively. Objective: To measure individual GMed segmental activity during 6 common, lower-limb rehabilitation exercises in healthy young adults, and determine if there are significant differences between the exercises for each segment. Method: With fine-wire EMG electrodes inserted into the anterior, middle, and posterior segments of the GMed muscle, 10 healthy young adults performed 6 common, lower-limb rehabilitation exercises. Main Outcome Measures: Recorded EMG activity was normalized, then reported and compared with median activity for each of the GMed segments across the 6 exercises. Results: For the anterior GMed segment, high activity was recorded for the single-leg squat (48% maximum voluntary isometric contraction [MVIC]), the single-leg bridge (44% MVIC), and the resisted hip abduction–extension exercise (41% MVIC). No exercises recorded high activity for the middle GMed segment, but for the posterior GMed segment very high activity was recorded by the resisted hip abduction–extension exercise (69% MVIC), and high activity was generated by the single-leg squat (48% MVIC) and side-lie hip abduction (43% MVIC). For each of the GMed segments, there were significant differences (P < .05) in the median EMG activity levels between some of the exercises and the side-lie clam with large effect sizes favoring these exercises over the side-lie clam. Conclusions: Open-chain hip abduction and single-limb support exercises appear to be effective options for recruiting the individual GMed segments with selection dependent on individual requirements. However, the side-lie clam does not appear to be effective at recruiting the GMed segments, particularly the anterior and middle segments.

Gluteus medius (GMed) activity levels have been evaluated across a range of therapeutic exercises.1 In most cases, single-leg weight-bearing exercises show greater activity levels than non-weight-bearing exercises when measured with a single-surface electrode over the middle GMed region.1 However, the GMed is structurally and functionally composed of 3 unique segments,2 and a large proportion of the anterior and posterior segments are deep to the superficially located tensor fascia lata and gluteus maximus, respectively.3 The aim of this study was to determine activity levels using fine-wire electromyography (EMG) for the anterior, middle, and posterior GMed segments during 6 common rehabilitation exercises. This may assist clinicians with prescribing targeted rehabilitation programs to prevent, manage, or treat segmental GMed dysfunction that is evident in pathology.4,5

This study was conducted on the same participants as described in a previous publication on gluteus minimus muscle activity.6 Ten healthy, active university students (6 males and 4 females) with a mean (SD) age, height, and weight of 23.8 (1.6) years, 177.5 (10) cm, and 79.9 (18.5) kg, respectively, were recruited for this single-session cross-sectional study. Institutional review board approval was granted in the spirit of the Declaration of Helsinki (Latrobe University human ethics committee approval, UHEC 13-005).

Fine-wire EMG electrodes were inserted into anterior, middle, and posterior segments of GMed as described previously.7,8 The electrodes for each GMed segment were connected to a wireless EMG system (Delsys® Inc, Boston, MA). An accelerometer (Trigno; Delsys® Inc) was secured to the top of the iliac crest, distal lateral femur, and distal, anteromedial tibia along with retroreflective markers (Vicon®, Oxford, UK) attached to selective anatomical landmarks for the purposes of delineating between exercise repetitions.

The experimental protocol has been described in detail previously.6 Each participant undertook at least 5 minutes of warm-up before performing 6 rehabilitation exercises in a randomized order paced to a metronome (Supplementary Video 1 [available online]). Three trials of 6 repetitions were performed for the single-leg squat (40 bpm), the single-leg bridge (40 bpm), the side-lie hip abduction (50 bpm), the side-lie clam (40 bpm), the running man exercise (90 bpm), and the resisted hip abduction–extension exercise (60 bpm) with 2 minutes of rest between the trials and exercises. A series of maximum voluntary isometric contractions (MVICs) (across 6 hip actions) were performed for data normalization (Supplementary Table S1 [available online]).

The R statistical software package (version 3.4.1; https://cran.r-project.org/) was used for analysis. The EMG data processing has been described in detail previously.6 Muscle activity was described qualitatively for each exercise using the following criteria: low (0%–20% MVIC), moderate (21%–40% MVIC), high (41%–60% MVIC), and very high (>60% MVIC). To determine if normalized (%MVIC) muscle activity for each segment differed across exercises, a nonparametric Friedman test was used along with Nemenyi post hoc tests (P < .05). An effect size was calculated by dividing the chi-square (χ2) test with the square root of the sample size.

Three participants’ data were excluded for each GMed segment due to artifact.

There were significant within-participant effects across all the exercises for GMed anterior median activity (χ25 = 23.98,P ≤ .001).

The side-lie clam had significantly lower activity levels than the single-leg bridge, the single-leg squat, and the resisted hip abduction–extension exercise with large effect sizes generated (Figure 1B).

There were significant within-participant effects across all the exercises for GMed middle median activity (χ25 = 18.76, P ≤ .002).

There were significant within-participant effects across all the exercises for GMed posterior median activity (χ25 = 13.61,P ≤ .02).

The side-lie clam had significantly lower activity levels than the side-lie hip abduction and the resisted hip extension–abduction exercise with large effect sizes generated (Figure 3B).

The single-leg squat challenges all 3 GMed segments to maintain pelvic equilibrium while controlling hip adduction and internal rotation, as the body’s center of mass is lowered toward the ground.10 This exercise should be considered a valuable functional exercise for strengthening all 3 GMed segments due to the high activity recorded in each segment. This result compares well with a previous review1 that found high to very high GMed activity levels were recorded for this exercise.

The running man exercise and the resisted hip abduction–extension exercise are performed in single-limb standing, requiring sizeable hip abduction torques from all 3 segments to maintain pelvic equilibrium.10 This is reflected by the moderate to very high activity levels recorded across the GMed segments and would be potentially effective for targeted segmental strengthening, where at least high activity was generated. The results of this study compare favorably with a recent study on healthy older women that investigated 3 different stance-leg, hip-hitch exercises with high to very high activity levels generated for all 3 GMed segments.5

The single-leg bridge is a popular rehabilitation exercise that has been reported to generate high GMed activity.1 With a substantial external torque created from the unsupported leg, moderate to high activity levels in all 3 GMed segments were required presumably to contribute to a hip extension and internal rotation torque for maintaining a neutral pelvic position throughout the exercise.10

By contrast, the side-lie clam was demonstrated in this study to be an ineffective exercise for targeting all 3 segments, with a smaller antigravity lever arm to overcome. Morphologically, the anterior and middle segments do not have favorable moment arms in the transverse plane for external rotation compared with the posterior segment,10 and the results from this study compare well with a recent study5 on healthy older women performing the side-lie clam that also showed low activity levels in all 3 segments.

Based on the results of this study, open-chain hip abduction and single-limb support exercises appear to be effective options for strengthening all GMed segments to potentially counteract dysfunction with selection based on the individual’s functional requirements. The side-lie clam, in comparison, does not appear to be particularly effective at GMed recruitment, especially the anterior and middle segments.

The sample size in this study was limited due to the invasive nature of the procedure. Despite this, significant differences in activation levels were still observed, and the use of effect sizes has provided an estimate of the magnitude of difference between exercises. For pragmatic reasons, the rehabilitation exercises included in this study are commonly prescribed in the clinic with the assumption as for any exercise that adding external load will have an effect on recorded exercise intensity level. Caution also needs to be applied when generalizing these results to clinical populations such as those with hip osteoarthritis and lateral hip pain. 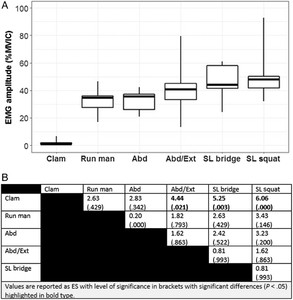 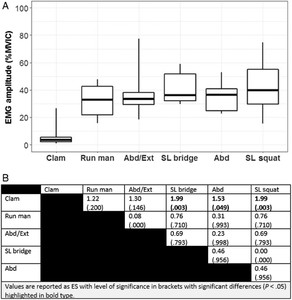 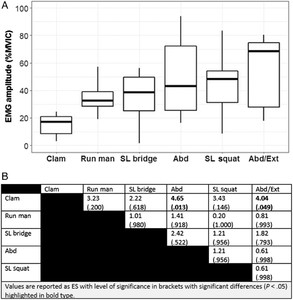