Bernstein’s Philosophy of Time: An Unknown Manuscript by Nikolai Bernstein (1949)

The authors have presented an unpublished manuscript by Nikolai Aleksandrovich Bernstein written in the form of a diary in 1949. Bernstein focused on the concept of time as a coordinate in four-dimensional space and discussed a variety of issues, including the definition of time, its measurement, time travel, asymmetry of the past and future, and even linguistics. In particular, he offered a definition of life tightly linked to the concept of time. Overall, this manuscript offers a glimpse into Bernstein’s thinking, his sense of humor, and his sarcasm, intimately coupled with the very serious attitude to scientific discourse.

—Left, the cover of the “Officer’s Field Notebook,” with Bernstein’s name written by another person in the top left corner. Right, a page from the diary, showing Bernstein’s handwriting. 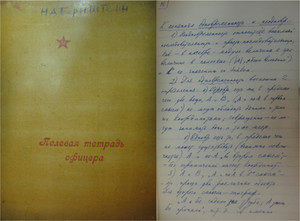