P Diddy’s Bad Boy for Life video provides a strategic point of departure in the quest for values and community, sui generis, in SportsWorld. This study poses an interruption to the “ideological” articulations of discourse on the relationship between hip-hop music and sports by providing an examination of empirical and scientific data inside of SportsWorld. There is a carefully crafted narrative about the coexistence among Black American athletes, SportsWorld, and hip-hop music. From the beginning of Black athletes’ entry into the White spaces of the so-called level playing field of sports—from National Association of Stock Car Racing to the National Hockey Association to Major League Baseball to National Basketball Association—this integration upsets the norms of both civility and history; because for many in White America, the belief persists that these same athletes were not then and should not be today in those sacred spaces. From Jackie Robinson to the Williams Sisters to Jack Johnson to Tiger Woods to Althea Gibson to Fritz Pollard and, of course, Muhammad Ali—all of these pioneers suffered the indignities of racial discrimination. As Smith argues in his 2014 book Race, Sport and the American Dream, fast forward, deep inside the second aught of the 21st century, it is often assumed that the addition of hip-hop music to the pregame and half-time entertainment at ballparks, basketball arenas, stadiums, and ice hockey arenas signals a welcoming to the Black Athlete and their fans. Using a Marxian lens, this study argues that both these assumptions are no more than the ideology of beliefs that Marx describes as “fantasies and illusions” or more straightforward a “phantasmagoria.” These fantasies and illusions show up as a laterna magica projecting images on society and in SportsWorld, where these can be described as commodity fetishism. Through the authors' empirical analysis of data on segregation and integration in SportsWorld, they demonstrate that things are not always as they seem.

—Race and age make-up of hip hop listeners compared to the US population. Source. Media Behavior and Influence™ Study. 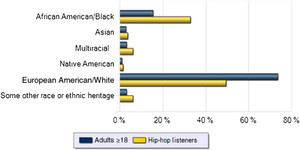